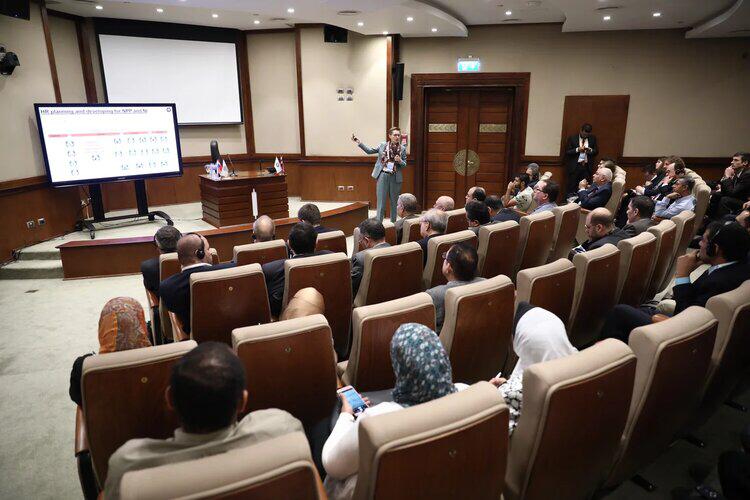 The Second Nuclear Industry Suppliers Forum organized by Rosatom State Corporation and Egyptian Nuclear Power Plants Authority (NPPA) was held in Cairo on October 8-9. 2019. The event was held in the framework of International Industrial and Technological exhibition and “Big Industrial Week” Forum.


In his speech during the Opening Ceremony, Mr. Shaker underlined that the Forum is the evidence of trust-based relations between Russia and Egypt and transparency to which Egypt is committed to during the realization of NPP El- Dabaa construction project. He also added that the event is the perfect opportunity to involve in the project not only local enterprises but also to build strategic partnership with international companies in order to implement the project in full and on schedule.


Kirill Komarov noted that “Rosatom focuses on localization of the NPP construction in Egypt. We expect that during the construction of the first Plant Unit this figure will reach the level of 20%, which demonstrates the professionalism of Egyptian contractors. Considering the future involvement of local contractors we try to build effective cooperation with our suppliersб that is why we are organizing this Forum for you already for the second time”.


During the forum the participants discussed different topics of the El-Dabaa NPP project’s implementation. This includes covering issues related to ROSATOM’s procurement system - the rules and other factors related to tender procedures for constructing the El-Dabaa NPP - how project designers, regulators, and businesses collaborate in the construction process, as well as other related challenges and opportunities. How Rosatom approaches complex decisions when constructing nuclear power plants abroad, creating nuclear infrastructure, and personnel training for the future of the plant. In addition, a discussion on the importance of work in the field of public acceptability of nuclear energy and humanitarian cooperation were made. Rosatom shared its extensive experience in these areas, which are an integral part of the successful implementation of the nuclear power plant project in the country.
About 600 participants, representatives of Egyptian and international companies in the sphere of construction, machinery manufacturing, engineering, equipment procurement and Egyptian leading mass media, took part in the event.


Headed by JSC “Rusatom Service”, industry integrator for training, assessment and development of nuclear infrastructure, the site was also visited by a delegation of representatives of Rosatom Technical Academy and National Research Nuclear University MEPhI. In the framework of the Forum the Delegation participated in the work of several sessions, including a session called “Nuclear Infrastructure and ensuring the public acceptance of the nuclear energy”. During this session Yulia Chernyakhovskaya, Deputy General Director for Nuclear Infrastructure, explained how local suppliers of first Egyptian NPP overcome Nuclear Infrastructure challenges. Questions related to the training of potential suppliers’ personnel attracted special interest: “This is an important aspect of the Nuclear Infrastructure Development in support of “El-Dabaa” NPP construction Project”, said Mohammed Megahed, Deputy Minister of Education and Technical education, after the session.


Another remarkable event of the Forum was “Preparing personnel for the El-Dabaa project” educational seminar moderated by P. Zhuravlev, Prorector-director of the department of international business development of Rosatom Technical Academy. The participants discussed the training of the non-operating staff. Yulia Chernyakhovskaya told about Rosatom’s approach to training of all categories of personnel, including Nuclear Infrastructure, scientific and other categories of personnel.
Rosatom also participated in the exhibition of the Big industrial week. At the stand, the visitors could explore the interactive 3D-model of “El Dabaa” NPP, which was created on the basis of the general plan scheme with a preliminary breakdown of NPP construction phases into separate tender lots. The visitors could also take part in the business-game allowing every participant to go through all the key steps of design project elaboration and construction of NPP with VVER-1200 generation 3+ reactors.


Rusatom Service JSC is a member of the "Electric Power" division of The Rosatom State Corporation. The company provides full range of services and supplies required for maintenance and repair for the foreign nuclear power plants that operate VVER-type reactors. The company is present on the market in almost every country with existing NPP VVER power units outside Russia.
Rusatom Service holds leading positions on the markets of China, Bulgaria and Armenia and acts as a general contractor of works for lifetime extension, implementation of scheduled preventive maintenance and upgrading the equipment at VVER nuclear power plants.