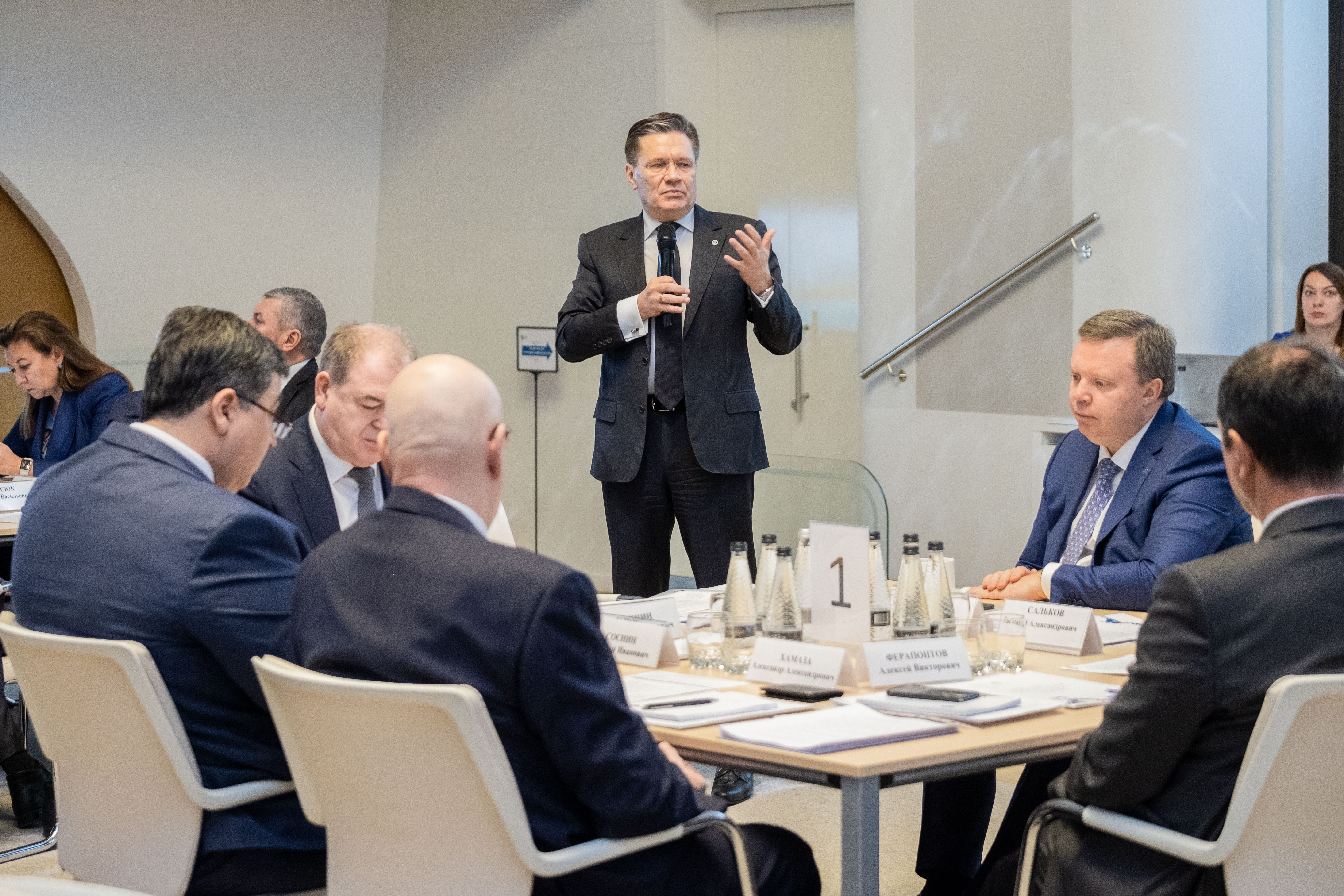 
The meeting agenda was devoted to the tasks which Rosatom faces as a supplier of nuclear technologies, and ways to solve them in the framework of nuclear infrastructure activities. Enhancement of industrial and inter-agency cooperation was identified as one of the main tasks. In particular, Alexey Likhachev noted the importance of teamwork, both within the industry and in partner countries.


Alexey Ferapontov spoke about the coordinated work of Rostechnadzor experts and quarterly meetings of the Governing Council dedicated to the nuclear infrastructure issues. He noted that developed nuclear infrastructure in foreign customers is a common goal of the Russian Federation. It provides for safe nuclear energy programme development and nuclear energy use in the country.


The participants of the event also discussed new products, including a floating small-sized nuclear power plant.
Vadim Titov, President of Private Institution “Rusatom International Network”, underlined the importance of public acceptance of nuclear technologies development during the implementation of projects abroad. "This is a cornerstone of the projects implementation. Our activities in the framework of the "umbrella" of nuclear infrastructure allow us to solve and avoid a number of challenges in the field of public acceptance in advance" he said.


Grigory Sosnin, Vice President - Project Director of "El-Dabaa" NPP construction of JSC " ASE EC” also gave several examples on this issue: "One of our cases demonstrated the need for unambiguous interpretation of the license documentation as all parties to the contract have their own vision. Otherwise, you may find yourself in a trap that will affect the duration of the project. Experience has shown that the nuclear infrastructure issues should have been addressed even before the construction project started."


Evgeny Salkov, General Director of JSC “Rusatom Service”, answered a number of questions: "The Expert community, which has existed for more than two years, is developing steadily. Together with Tatyana Terentyeva, Director of personnel at ROSATOM state Corporation, we developed tools for involving and motivating industry experts. We have a special type of career – an expert career, our local and industry documents state that an expert can take a managerial position. Motivation tools have also been developed. First of all, it is the participation of experts in projects and the opportunity to represent Rosatom in countries that have embarked on the path of nuclear energy programme development. Secondly, it is an opportunity to build a career in international organizations. Thirdly, it is also a financial incentive that is actively used.


In addition, we have created a process model for the participation of experts in projects: we issue an order on the level of State Corporation to form a team. The head of the organization nominates experts from his organization and agrees in advance that the expert will devote a certain amount of time to the nuclear infrastructure project. In order to enhance experts’ skills, a share point with specialized documents has been created, experts are also sent to international organizations for training, and share their experience and impressions in the quarterly Bulletin."
The participants noted that such events bring the Rosatom team closer together and make it more united. Alexey Likhachev supported the proposal to hold Business breakfasts on an annual basis. "We must assemble regularly, to tighten our ranks and bring in new experts", - stated he.

***
Rusatom Service JSC is a member of the "Electric Power" division of The Rosatom State Corporation. The company provides full range of services and supplies required for maintenance and repair for the foreign nuclear power plants that operate VVER-type reactors. The company is present on the market in almost every country with existing NPP VVER power units outside Russia.
Rusatom Service holds leading positions on the markets of China, Bulgaria and Armenia and acts as a general contractor of works for lifetime extension, implementation of scheduled preventive maintenance and upgrading the equipment at VVER nuclear power plants.